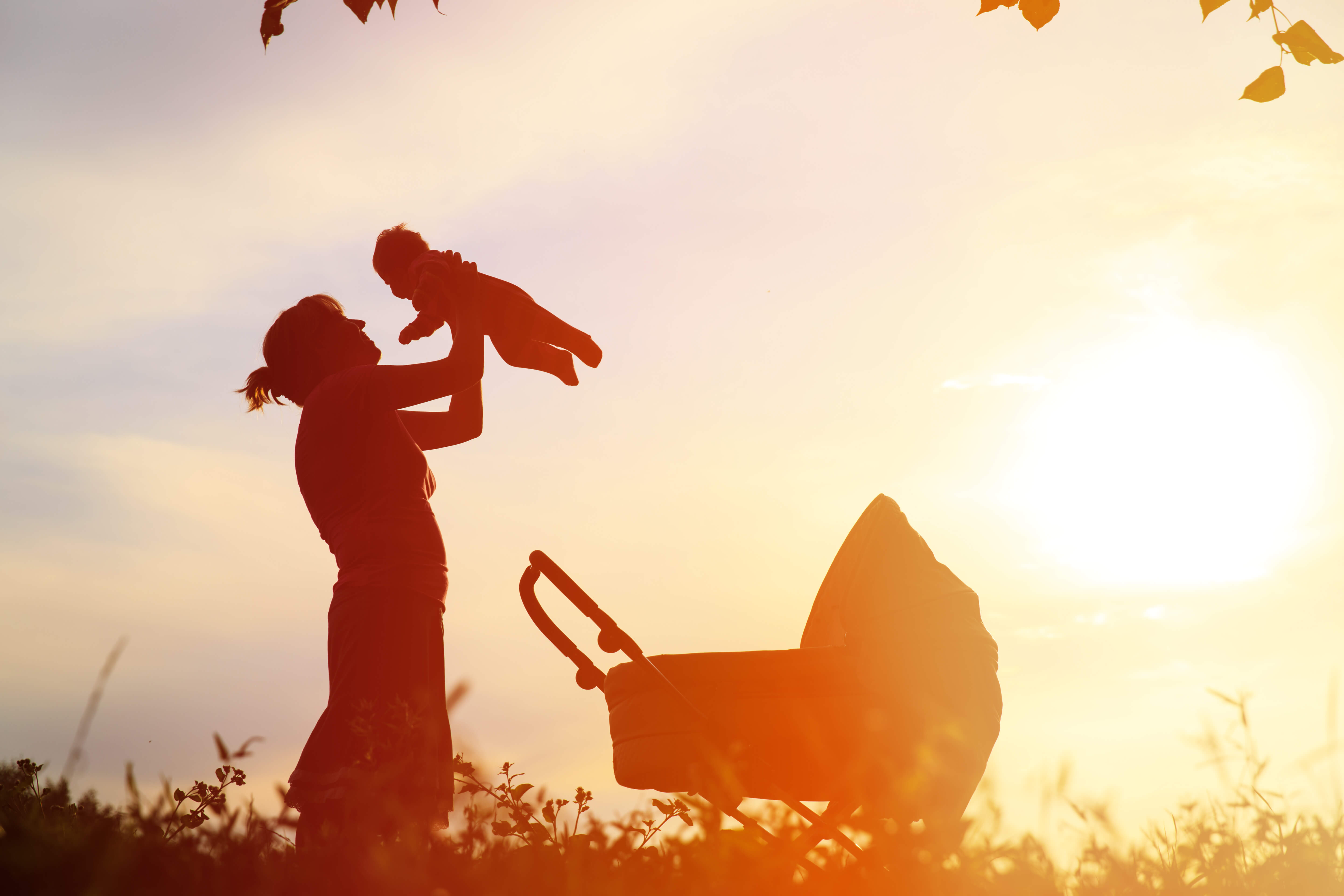 I had never considered myself old in my thirties. I felt I was just hitting my stride. Then I became pregnant and attended my regularly scheduled OBGYN visits, and my age became not just a number, but a statistic. That sure planted the seed for becoming a walking nervous disaster; as if I needed more anxiety as I approached my heart attack years.

At 37 years-old, I didn’t think twice about the stigma of being an older mom. Truth be told, I was unaware of the “advanced maternal age” classification. Normally I’d be pretty proud of being in a specialized class, but apparently this was a bad thing? In my mind, I was doing well by getting pregnant under my own personal age cut-off of 39. At age 37, I thought I was way ahead of the game.

The game of being Advanced Maternal Age came with its own set of rules. When the doctor initially called me “AMA,” I thought to myself, “Does that acronym stand for ‘Awesome Mom Awaiting’? If so then you are correct!” I was then informed of all the anxiety-inducing statistics of what being of advanced maternal age could, and I stress could, mean. I teetered out of the doctor’s office, wide-eyed, scared and feeling about 10 years older than when I walked in.

I exited the building with my new title and cognizant of the fact that I had several more visits to go than the average twenty-something pregnant woman. I was told being over age 35 equals a high-risk pregnancy and more testing for possible abnormalities. Feeling overwhelmed, over-aged and overly nauseous, I arrived at my vehicle and sobbed like any proper older pregnant woman would.

To make matters worse, I had only recently dried my tears from my miscarriage that I had suffered a year and a half prior. That entire event had left me consumed with fear, and now that I was at higher risk for another miscarriage and baby abnormalities, I truly did not know which way to look.

So I chose to look up.

I returned to work that day and as I tossed my faith upward and bent my head back to watch it soar, I jumped out of my seat, ran to the bathroom and tossed up my first breakfast banana. In my first pregnancy, I knew that something was wrong when I awoke one day and no longer felt nauseous. This second pregnancy was giving me the worst and longest “hangover” I ever had. I was more than fine with the sickness, though. Based on my previous experience, in my mind, if the sickness went away, so would the baby. Besides, I had some hands-on, boot camp-like practice in my twenties in having to be functional all while feeling like I had just been hit by a semi-truck. I knew how to navigate through this stage 🙂

With my boots pulled up and my faith guiding me from above, I dove in to my first trimester. I have always been the athletic type and never good at sitting still for too long. However, in the first trimester I nearly cut out all exercise completely. I was petrified that if I did a squat or lifted something heavy, I would accidentally push something out that was not quite ready or cause irreparable damage. Well, that and I was always worried of vomiting if the wind changed direction. Truly, this is how my brain began to process all these frightening AMA statistics.

So for the first time in, well, ever, I sat still. I learned a lot about myself in those silent moments, but I am never one who should be left alone with only their thoughts. I would, on several occasions, allow those thoughts to drift in to the “what if” dark realm and psych myself out completely. Every day and all day for the first 14 weeks I was extremely cautious and very nauseous. Moreover, I was panic stricken when I had to visit the doctor. I practiced mental stabilization every time I arrived at my appointments because of how my last pregnancy ended when they were unable to find a heartbeat.

At the “heartbeat” appointment for this pregnancy my husband and I walked down the long the hall to the exam room. The nurse placed the Doppler on my stomach and we heard nothing. My husband looked at me and said, “Here we go again.” In an attempt to disregard his statement entirely, I asked myself, “Why is he singing Whitesnake at a time like this?”

There it was–our baby’s heartbeat in perfect time.

I took a bow as my first trimester ended and welcomed the second. We finally reached the “safer” mark for the pregnancy not to miscarry. With those mountain-top feelings of joy, I quickly slid down into a valley when the time came to see a specialist due to my “AMA” scarlet letters. This particular group does extensive testing on the baby to check for abnormalities including Down syndrome. Statistics say that when you are over 35 and pregnant, the chances of your baby having a genetic disorder increase dramatically. My best friend is a nurse and reminded me that I could refuse any testing if I so chose, but I  wanted to know.

So there we were again, sans the Whitesnake song, taking a long walk down a short hallway. We were put in a room to be interrogated about family members I hadn’t spoken to since 1985. The questions ranged from health problems, to ages, to deaths, to diseases I’d never heard of and still cannot pronounce.  Most of our answers came with a response of, “Uh? No???” So that went well.

After being escorted back in to “Gen Pop,” our names were called again and we were placed in our cell. I closed my eyes, held my husband’s hand and prayed. The ultrasound technician politely carried on a conversation with us then asked if we wanted to know the sex of the baby. I thought, “This works; knocking out two birds here.”

I immediately looked over to my husband. His head dropped and he let out a gigantic, worrisome sigh. “I knew it!” he said. I roared in laughter and cried all in the same breath. At that moment I could’ve cared less what those tests said. She was our little girl, and I fell more in love with her at that moment than I was already. The doctor arrived and looked more closely at the ultrasound images. “She looks beautiful,” she said. With tears welling in my eyes and thankfulness in my soul, I could not have agreed more.

As the third and final trimester came, I said goodbye to 37 and hello to the age of 38. I reflected and realized that I now had only the last few visits at the doctor’s office left. It was here when I really began to feel my age. I would arrive at these visits, sit in the waiting room amongst other pregnant bellies and listen to the voiceovers in my head…

“I have sweatpants older than you.”

“You don’t even want to know what I was doing when you were born.”

“Does your mother know where you are?”

God’s funny little jokes never get old, but apparently I do…

I would sit wondering if these whipper snappers had been exercising regularly and eating like an organic maniac like I had. Now hear me when I say this, I would have given my hair, teeth and eyeballs for a tuna sub, a turkey sub, hummus, peanut butter with honey, McDonald’s and a Coca-Cola, but nooooo, that would be breaking the pregnancy rules. My blood pressure, pee tests and weight gain of only 28 pounds told me that I had done well. I was blessed, relieved and ready for this baby to come out. During my final weeks of pregnancy in all my discomfort and feelings of old, it finally dawned on me…

…WAIT!  How exactly is this baby coming out?

(That is a topic for another day entirely)

So it seems to me that the “AMA” letters that were stitched in to all my maternity shirts are simply just a cautionary red flag for what may happen. It does not negate the fear factor one may feel while at the same time doctors are saying not to stress and to relax. But if you take a look around you, this trend is occurring more frequently and many women are having healthy babies well after the age of 35.

Ultimately, I found comfort in a statement my doctor made. She said, “I’d rather care for a 40 year-old woman who takes care of herself than an 18 year-old who knows everything.”

After taking the best care of myself that I possibly could, I gave birth to a 7 pound, 12-ounce angel on her exact due date (5% chance of that happening, by the way). I constantly get asked if I am going to have another child. That question can easily be answered with the old adage of, “If you want to make God laugh, tell Him your plans.” But, my final answer? 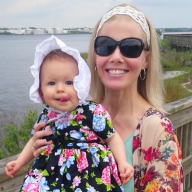 A Day Late Mom (Erin H.) grew up in Northeast Florida all while enamored with her musical family in Kentucky. Erin graduated from the University of North Florida with her B.A. in Communications, cum laude. She spent most of her years after college pursuing her musical dreams. Most notably she tried her hand in Nashville and sang on stages graced by country music legends. Erin has also had successful careers in hospitality, higher education and banking. Over the years, Erin became enthralled with and passionate about organic living. Having never really given thought to marriage and babies, Erin found herself married and pregnant at 36 years-old. After suffering a miscarriage, Erin became pregnant again at 37 years-old and gave birth to a happy, healthy baby girl at 38. Citing this experience as the most significant event in her life, she has chosen to share her experiences of being a healthy, humorous, “AMA” mom in a time where so many women are waiting to have babies. You can follow her on her blog at www.adaylatemom.com, Instagram @adaylatemom, Twitter @adaylatemom and on Pinterest at www.pinterest.com/erinbrooke20/.