The “F” Word: My Personal Journey With Fibroids

As a recent medical school graduate, of course I had heard of fibroids. But I didn’t know about them until I was doubled over in pain in the hospital. I wasn’t a patient though; I was a second-year Family Practice resident sitting at a desk trying to write a note on a patient. The pain was so intense that I had to leave work early. I never leave work unless I feel like I am on the brink of death, so this was a big deal for me. I decided it was time for the doctor to see a doctor.

At the gynecologist, I reluctantly had a pelvic exam and pelvic ultrasound. I was in Chicago for a conference when the nurse from my doctor’s office called me with results. She said that I had two small fibroids in my uterus and it was nothing to worry about. So I didn’t worry about it. Little did I know that the fibroids were slowly growing and sucking the life out of me.

Over time, my periods got heavier and heavier and my pads became larger and larger, until I was finally wearing something that looked like a cotton spaceship. My then fiancé found them for me. By this time I was working at my first job as a full-fledged physician. I was incredibly busy, managing an entire community clinic by myself. I chalked my exhaustion up to my demanding job. When I got home from work each day, though, I would pass out on the couch. I didn’t have the energy to do anything. My fiancé pushed me to go see a doctor, and I reluctantly agreed. My hemoglobin, or blood count, was 8.9 (the normal range is 11-15). She gave me a prescription for some iron tablets, and I went on my merry way. Looking back, I should have seen a specialist then because my blood count was too low for me to blow off. But again, I was so focused on getting back to work that I didn’t give it a second thought.

Here’s a dirty little secret of mine: From 2012-2015 I didn’t have health insurance. I was working locum tenens as an independent contractor physician, so I didn’t have health benefits. I figured I was good because I was young and relatively healthy. When I needed blood pressure medicine, I would just go to an urgent care cliic and get a refill. When doctors found out I was a doctor, they would give me a script with several months of refills. They did it as a professional courtesy, but it in reality it enabled me to continue neglecting my health.

The years of neglecting my health came back to bite me in the butt in 2014. I was lying on my back in bed one day and happened to run my hand across my stomach. I felt a lump on my right side near where I thought my ovary should be. Was it an ovarian cyst or a tumor or cancer? I was terrified, but not still terrified enough to go back to the doctor.

It was not until my husband confronted me about avoiding sex, that I broke down and confessed. I had been leaking urine and feeling pressure in my pelvis for months. When my menstrual cycle was coming, it felt like a wet towel was crammed into my lower abdomen. I was simply too afraid to see someone and find out what it was. I was a doctor who was too afraid to be a patient.

By 2015, I finally had health insurance and went to a doctor. We discussed the fibroids and heavy bleeding, and she ordered some blood work. The next morning she called to tell me that I should go to the hospital immediately. My blood count this time was only 6.4! My husband, who never drives me to work, had just dropped me off so I called him just to tell him what the doctor had said and that I would go after I finished seeing my patients. Despite my protests, he took me directly to the emergency room. There, I received and EKG and two units of blood. I could literally see the palms of my hands and fingernails flushing to a bright pink color. I had never realized just how white they were until then!

After being discharged from the hospital, I went to a gynecologist. Before my visit, I had to have another pelvic ultrasound. I was dreading the transvaginal ultrasound probe. I just knew there was all kinds of badness going on in my abdomen. Every few millimeters she would click and type. Then she would move a few more millimeters and click and type again. She must have repeated this at least twenty times.

The gynecologist then performed a pelvic exam and a bimanual exam (two fingers on the inside and a hand on the outside). Afterwards, she reviewed the ultrasound results with me. As I suspected, there were multiple fibroids, with the largest two being 6 centimeters in size on the outside of my uterus. I also had several in the wall and inner lining of my uterus. She said that if I wanted them removed, I would have to have an abdominal myomectomy. This meant she would have to give me a C-section-type scar on my abdomen in order to reach my uterus to remove the fibroids. I went home to think about it and discuss my options with my husband.

With an abdominal myomectomy, I would be out of work for six weeks. There were other options for treatment, but my priority was preserving my fertility; I wanted to ability to have children in the future. Laparoscopic myomectomy was another, less invasive option and the recovery would only be 2-3 weeks, but the GYN office that I had gone to didn’t have a laparoscopic specialist, so they referred me to a university hospital. The specialist there did another comprehensive exam and was concerned that I may also have endometriosis because she felt a mass between my rectum and vagina. I was just as surprised as she was when hot tears started rolling down my face. I felt like endometriosis would certainly mean fertility issues. She calmed me down and told me that we would get and MRI to get more information.

What we found out from the MRI was that the mass was not in my rectum. It was just in the back side of my vagina. The other good news was that it seemed to just be an oddly placed fibroid, and not something more sinister. I was given a prescription for birth control pills and was told that that due to the size and location of my fibroids, I was not a candidate for laparoscopic surgery, so I was scheduled for open abdominal surgery.

While waiting for my surgery, my husband and I went to Ghana. In Ghana, my husband’s aunt got me some abeduro from the market. These were green peas that were supposed to be good for anemia. They tasted terrible, so I blended them into fruit smoothies. Even though I was skeptical, I have to admit they worked. Before my surgery my blood count went to 13!

My surgery went well. I remember being nervous as they prepped me for the operating room and then waking up as the nurse was putting vaseline on my lips. My surgeon said that even that pesky fibroid on the back wall of my vagina had just “popped out” with ease. I truly believe that was due to the faithfulness of God and the hundreds of people that I had praying for me. I was discharged the next day.

My recovery at home was quick. I stayed out of work for five weeks at the insistence of my mother and husband. I’m almost three months out from the surgery now and mostly what I’m feeling is freedom. I am free from having to wear a pad or a pantyliner every day. I am free to wear form-fitting dresses without looking like I’m five months pregnant. My hope is that one day I will be pregnant, but for my uterus needs time to heal and recover. Hopefully, this uterus that was the source of so much misery can someday become the source of immeasurable joy.

I waited way too long to have my fibroids taken care of. If I had seen a doctor sooner, I may have benefited from non-surgical treatments like birth control pills or Lupron (a medicine that reduces estrogen and stops your period). If my fibroids were smaller at the time of intervention, I might have been a candidate for laparoscopic, or minimally invasive, surgery. The entire operation is done through small incisions and the recovery time is much shorter. Don’t wait. If you notice painful periods, heavy menstrual flow, pelvic pressure, painful sex or urine leakage, make a doctor’s appointment. 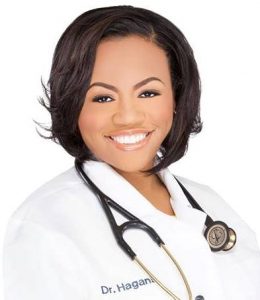 Jarita Hagans, MD is a Family Practice physician in the Washington, DC area, speaker and author of the forthcoming book "MD Dreams: Practical Advice for Every Stage from Premed to Residency and Beyond".  You can find out more about her book at mddreams.com.